For all your poker needs 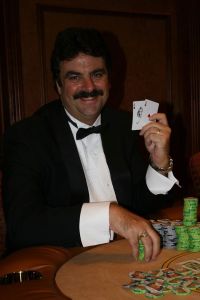 Roy Cooke is a professional poker player, consultant, and author. He was born in Atlanta, Georgia on April 12, 1957. He spent most of his childhood in Derby, England before moving to Bellevue, Washington. While in Washington Roy attended the University of Washington where he majored in Computer Science. Roy was always in the poker room in Washington. That is where he met his wife, Misty. Together Roy and Misty moved down to Las Vegas so Roy could pursue poker at a more competitive level and have the family they always wanted.

While in Las Vegas Roy became more well-known in the poker community. He was manager of the first online poker site, Planet Poker. His job was to go into each poker room and scout for cheaters. In addition he became a columnist and later senior columnist for Card Player Magazine, which he has now been writing for over 25 years.

During his poker career Roy and Misty Cooke began a Real Estate business in the Las Vegas and Henderson area. They have been selling real estate for over 25 years. They are currently at Realty One Group and has been a top performer for his entire career.